The second phase, scheduled for completion in 2016, will add another 500 hotel rooms and add 100,000 sf to the indoor waterpark. The resort is African-themed just like the first two Kalahari Resorts in Wisconsin Dells WI and Sandusky OH, Owner and CEO Todd Nelson traveled with his family, and a small film crew, to Africa to explore the area and purchase furniture to give the resort an authentic look and feel. Package room rates start at $200 to $300 with admission to the waterpark included in the price. While the Poconos supply of hotel waterpark resorts is expanding, the destination is still under-served due to the heavy population in the New York City, New Jersey and Philadelphia markets. The new lure of the Poconos is undeniable according to Nelson. The region attracts 25 million visitors each year, with over 90% coming for leisure, generating 33,700 jobs, $1.2 billion in labor income and about $300 million in state and local taxes. For more, call 877-525-2427 or go to www.kalahariresorts.com/pennsylvania.

Camelback Mountain Resort in Tannersville PA, already a successful ski resort in the Pocono Mountains, opened a 453-room hotel with conference center and a 134,000 sf indoor waterpark in April — adopting the four-season strategy by offering recreation and entertainment for all ages year round. For more, talk to owners Art Berry and Ken Ellis. The management team is headed by Pete Helland, who owns and manages the Wilderness Resort in Wisconsin Dells. Call 570-629-1661 or go to www.skicamelback.com. 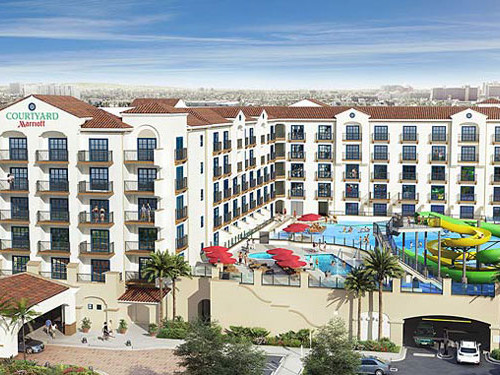 Courtyard Anaheim Waterpark Hotel opened in July 2015 with 221 rooms and the 20,000 sf Surfside Waterpark. The hotel is directly across the street from Disneyland. The rooms are extra big (530sf), sleep six, feature bunk beds and provide two showers. Surfside Waterpark is located atop a 20,000 sf observation deck where you can enjoy 6 waterslides, a 400 gallon dump bucket, water cannons, swimming pool, children’s pool, hot tub and a view of the Disneyland fireworks. There’s the Bistro for breakfast, Starbucks coffee bar, outdoor café, a fitness center and free Wi-Fi throughout. For more, call 714-254-1442.

Norwegian Cruise Line’s Escape Aqua Park will launch November 2015 from Miami FL with 4 waterslides, a kids aqua park, 2 pools and 4 hot tubs plus several adventure sport facilities. The four waterslides include a dual racer, a free fall slide where side by side racers fall into a loop when the floor drops from underneath them, and more relaxing family open body slides. The kids aqua park features an enclosed tube slide and a 2-story climbing structure. The adventure sport facilities include a 3-story, 99-element ropes course, 2 walk-the-planks that extend over the edge of the ship and ziplines that allow guests to soar through the air. The Norwegian Escape will be the line’s largest ship to date — carrying 4,200 passengers. It will sail to the Caribbean from Miami year round with stops in Tortola, St Thomas and Nassau, starting November 2015. For more, dial 888-444-5986 or go to www.ncl.com/escape.

Doug Pope’s Floating Oceana Water Resort about 16 miles northwest of Key West FL has stalled due to lack of financing. The first of its kind concept calls for 50 rooms to be built 6-stories high on a floating platform in the Gulf of Mexico. The resort would be built on a 230-foot by 128-foot platform atop four semi-permanent pilings on pads resting on the sea floor, 55 to 60 feet down. The resort is planned as a partially moveable structure. Estimated cost of construction is $20 million. Construction may start in late 2015 or 2016. Target: avid fishermen. For more, investors may contact Doug at 904-838-6619.

Blue Harbor Resort in Sheboygan WI added The Riptide, a double-wide indoor surfing ride called the Flowrider. The new ride not only extends the surfing season amid 84-degrees year round, it allows the indoor waterpark resort to attract teens in addition to the younger middle-school generation, according to David Sanderson, general manager.

Splashway Waterpark Added a 6-foot-deep, 30,000 sf Wave Pool to its outdoor waterpark in Sheridan TX — which opened in May. Splashway is an 80-acre RV Park & Campground with tent sites, cabins and cottages. For fun, there’s 8 ziplines that run 70-feet high over 4,000 feet of cable. For more, visitwww.splashwaywaterpark.com.

The Dollywood Company of Pigeon Forge TN consists of the 150-acre Dollywood theme park, the 35-acre Dollywood Splash Country outdoor waterpark, Dollywood Cabins and the new Dollywood DreamMore Resort, which opened its 307 rooms in June 2015. The nearly 4,000 sf resort pool meanders through a lush pool deck. At one end is a gentle waterfall just outside the lobby’s 3-story windows. On the other end is a zero-entry swimming pool that slopes just like a natural pond or lake. Best of all, the resort is next door to the theme park and the waterpark. For more, go to www.dreammoreresort.com or visit www.dollywood.com.

In the USA, here are the hotel waterpark resorts that are under construction and projected to open in 2015:

The Town of Blaineville, part of Greater Montreal, Quebec, Canada, has acquired the 900,000 sf of land it needed to construct its $40 million Aquapolis Indoor Waterpark. About 100,000 sf is being used for the indoor section of the waterpark and another 30,000 sf is being used for the outdoor waterpark. The building will cost $11 million and the equipment will cost $29 million. The remaining space is designed for green parks, parking and 4 to 5 hotels. The Divco Group, Rosdev and Capital Liason are backing the project as investors. Aquapolis will have a 2,500 person capacity, which translates into about 500,000 visitors annually, with ticket prices for the day costing around $27. Aquapolis is scheduled to open in November 2015.

As we see it, there are no hotel waterpark resorts in the Caribbean that are under construction and opening in 2015.

While some of these properties have broken ground, others are in various stages of development and still others have yet to secure financing. What appears on the horizon may not become reality. However, these developments are worth watching!

That is what’s expected to open in North America during 2015 and 2016. If we missed something, please let us know.

Stay positive, work smart and do the right thing!